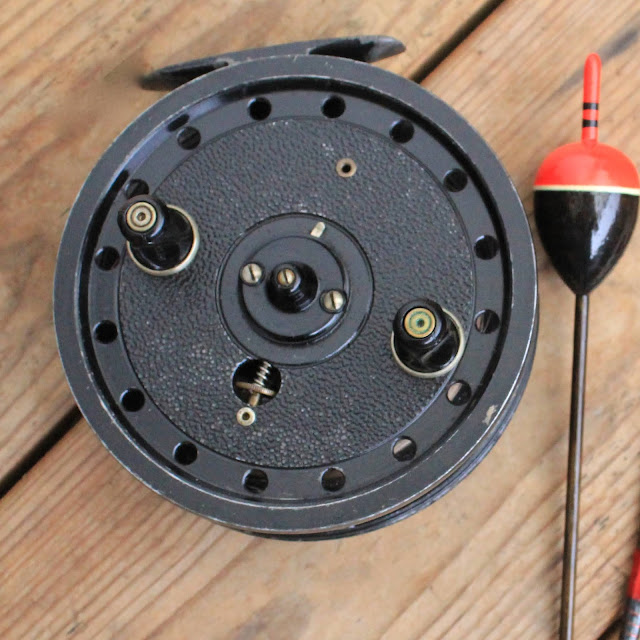 I've been having a sort of tidying-up week while our politicians and policy makers 'um' and 'ah' about whether we can fish or not, or do we have to remain housebound. Anyway if I'm on my own in the middle of a 2,000 acre farm I don't think I can be more self isolated. However I'd dug out my centre-pins to give them a clean and oil when I realised the span of time, or life, that they've covered.
At the top a Rapidex that I bought in 1962 for £3 7s 6d, a whole week's wages earned by shovelling manure on a market garden after I went to art school in 1963. I craved an Allcocks Aerial but at three or four times the price and a shortage of patience on the saving front the Rapidex fitted the bill nicely and it's served me well over the years, it remains totally original too. 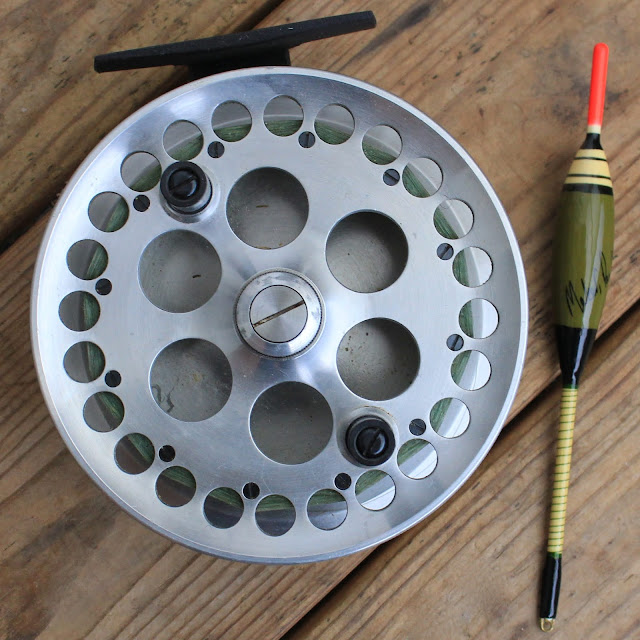 Next, many years later and probably in the mid to late eighties, came the Adcock 'Stanton' Centre Pin made in Nottingham, it will spin forever and the drag is finely and infinitely adjustable. It was a wedding anniversary present and presents don't get much better than that. Or do they?
Finally the retirement present and an absolute cracker. We met Gary Mills of The Mill Tackle Company at the 'Vintage Tackle Show' in Redditch about twenty years ago and the Boss bought this Aerial from him as a retirement come Christmas present. Nice.
Now I use it exclusively for perch fishing on the drains in West Norfolk. It's a beautiful piece of hand-made, machined and constructed engineering, perfectly balanced and an absolute treat to use.
Now I just need to get out and use them. Socially distanced of course. 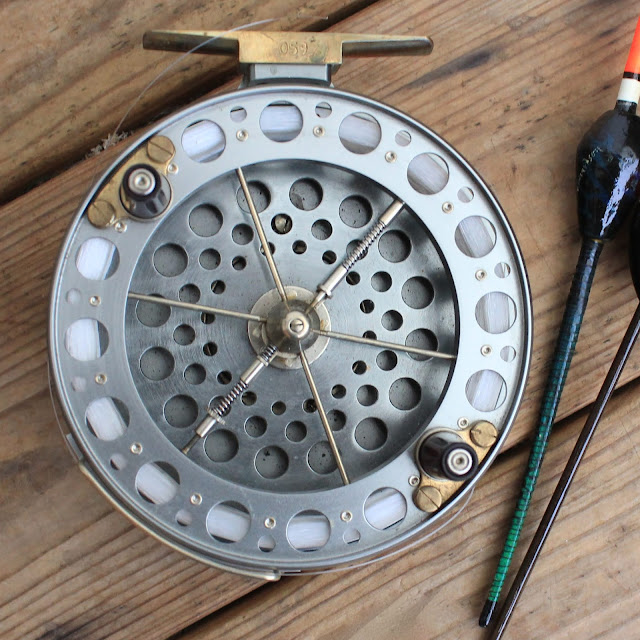 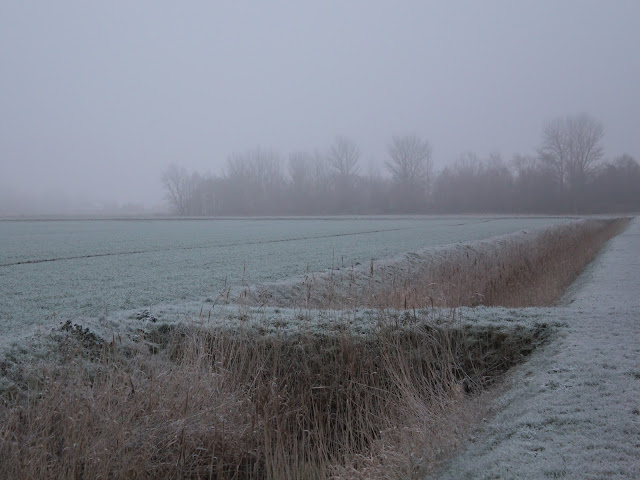 In truth it's not quite the last waltz but the last walk of a frankly depressing 2020. The year seems like the none to subtle main plot line for a Science Fiction novel. At times it was so hot that it was almost unbearable, well it was for the UK anyway, and all through this we had a chorus line of politicians from various countries dancing around and massaging their egos with statements, counter statements, non-decisions and probably lies but in the spirit of the season I'm being generous there.        Anyway back to the terrier walk and the joy of silence in the freezing fog, just the sound of the terrier's paws crushing through the shallow puddles frozen in the tractor tracks and the frosty grass. Then throw in the excitement of meeting the farmer's Golden Retriever and all three of them are in a state of perpetual motion.       There wasn't a breath of wind this morning and there still isn't, the fog has drifted, steadily thickened and faded, then i 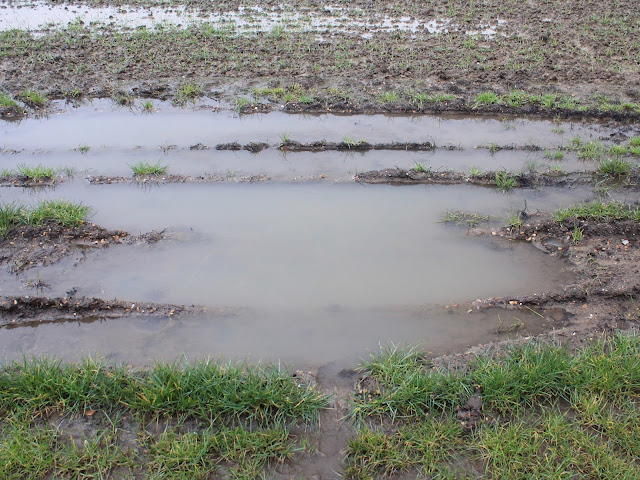 One shade of grey and lots of rain

On Thursday it rained all day and most of the previous evening too. I'd emptied my high-tech rain gauge out before I went to bed on Wednesday night so the measurement would be a reasonably true reading for the twenty-four hour period. The rain wasn't the biblical type of rain we have enjoyed it was just steady rain pouring down all day and into the early evening.       The result was that over an inch and a quarter fell on ground that was already waterlogged but draining away, so up came the water levels and the dykes gathered around two feet of water in no time. Needless to say the farmers are quite grumpy about the standing water on their crops and as an added bonus the temperature is staying stubbornly just above freezing during the day and freezing at night. What a pleasure.       The two terriers got absolutely filthy as well as soaked on the morning walk and from mainly white to brown, the only contented creatures that I saw were the ladybirds hibernating behind the 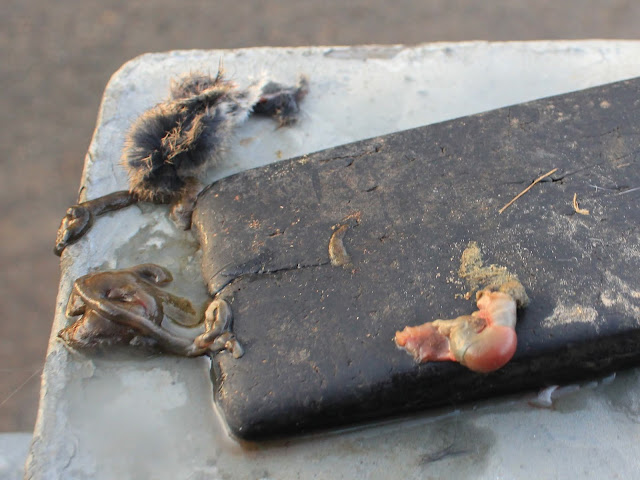 Just about every morning there's a Kestrel perched on one of the electricity poles beyond the back door studiously and thoroughly surveying his domain for a breakfast treat. On this particular morning last week I watched him dive off the post, hover and drop onto his prey despite it not being fully daylight.       An hour or so later and I could see that his first high protein meal of the day had been consumed on the gate post of the farm gate as I made my way through with the two terriers. Admittedly they aren't very attractive leftovers, apart from the fragment of fur, but it keeps him or her flying. I don't have any idea if Kestrels have their own defined territory but the hawk is always flying around or perched on some vantage point on a farm building or in the orchard. I'll keep watching.