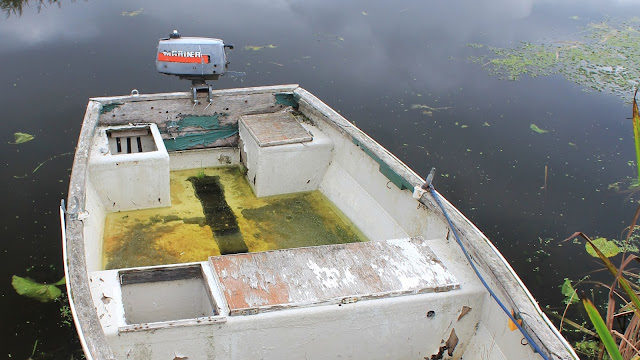 The first serious fishing expedition of the season and it was warm without a breath of wind and barely a ripple on the surface of the drain. The banks are still smothered in reed and vegetation and should you start cutting through the vegetation for a fishing spot you'll end up in drain and struggling to get out of the water. Common sense prevailed and I headed for the old boat moorings, I didn't fancy wild swimming particularly fully clothed. In fact I don't fancy wild swimming at all. I do find the old moorings mysterious and promising, they're going to get some serious attention this winter. 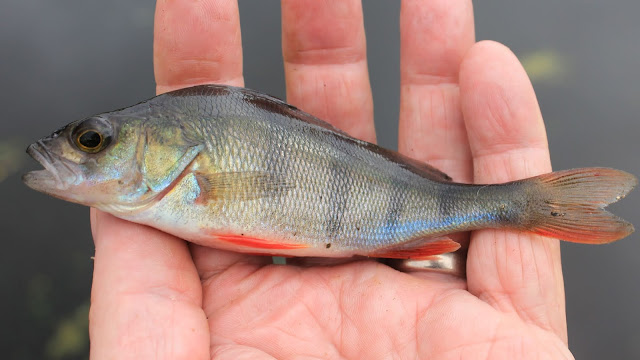 The drain appeared barren, no Roach, no Rudd  and all my tiny red worms yielded were three small perch the biggest was small, but beautiful, and the sample just got ever smaller. The colours on this little fellow were just beautiful so small or not it's still a jewel to be admired. The greenery had that tired and exhausted early autumn look to it with the rich colours gradually washing away before the big change to autumnal colours starts. 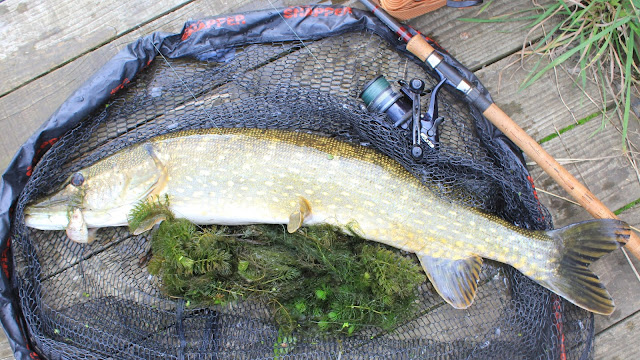 All the time I was testing the water for silver fish I had a dead roach fishing on the bottom of the drain, once the float moved a couple of feet but it never developed into a run. After an hour of watching the float, kingfishers and dragonflies a solid run developed that got the bait runner chattering away. I didn't see the fish for eight minutes or so and at first I thought it was a Zander withy all the head shaking but it was the first Pike of the season and in double figures it was hooked neatly in the scissors and it fairly filled the new landing net. You have to be really happy with that. 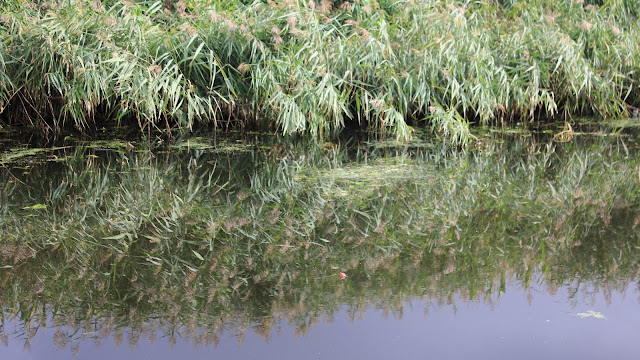 I fished on for another hour or so before deciding to go home and take the two terriers for a walk, they were as happy to see me as I was to catch the pike. My motto for this winter's fishing, don't be greedy and be happy with what you have had, for a session of only two or three hours that was a perfect result. 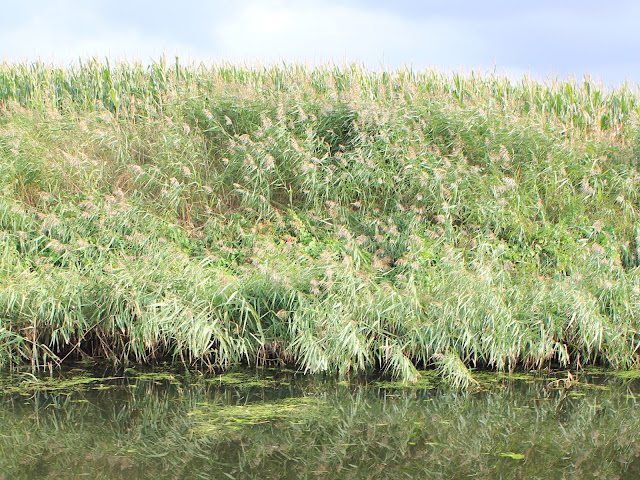 Why don't you just leave it alone?

I went pike fishing for a couple of hours on Saturday afternoon, unsuccessfully as it turned out, and met a somewhat angry farmer. When I asked what was wrong he took me to the Bankside and simply said 'look at it'. A riverbank that looked like this a few weeks ago with plenty of cover for birds and wildlife now looks like this. Now that finished result is definitely what I call 'improving it worse'. No respect at all.       The drainage board had been at work with their toys cutting the reed, sedge and all bank side growth back to near baldness leaving the trimmings to rot and sour. And these organisations are supposed to be the new guardians of wildlife and 'maintain the waterways'? The farmer and I have no idea why they remove all cover and protection although the farmer reckons that they'd like the all of the banksides to look like a garden lawn.       The fishing amounted to a couple of small perch and and two lost pike which summed up the mood 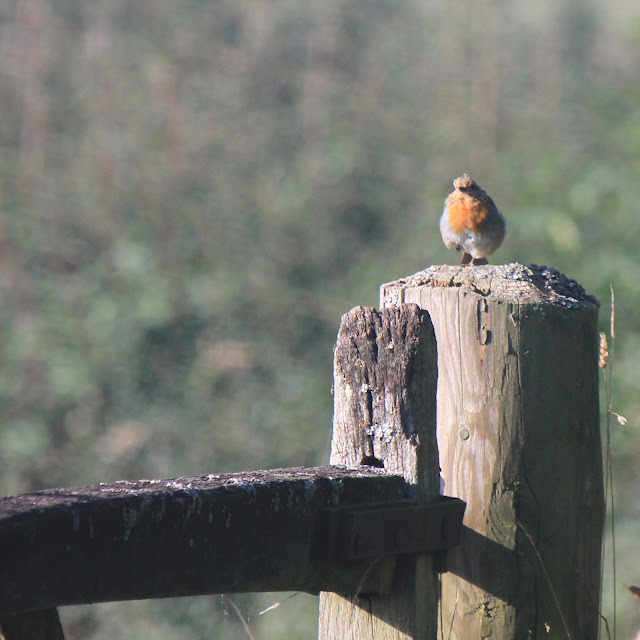 When I'm out in the garden, pretending to maintain the jungle or digging worms for my next perch fishing expedition on the river or drain a new friend turns up to watch, criticise and help. I suppose that really Mr Robin is only being an opportunist and looking for worms to fill fill his belly and keep his strength up as the colder weather approaches.       Whatever the reason I'm always pleased to see him, or her, and although the little bird keeps just out of range of the two Jack Russells it seems pretty fearless. It obviously thinks like a terrier and reckons that it is a big bird not a few grammes of feathers and bone. 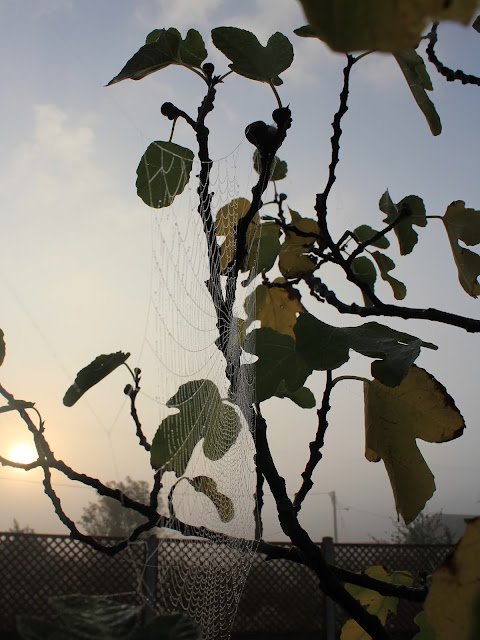 The spiders are showing off again

The cooler and damp mornings are allowing the spiders to show off their undoubted craftsmanship and skills and its great to see these seemingly flimsy webs that are actually incredibly strong. We've them on the car before and they've lasted all the way to Berkshire and back, a couple of hundred miles plus, so they are a lot stronger than you think. Scaled up to our size they'd make great rope but I wouldn't want to meet the spiders that had been responsible for them, I think we'd be the prey.       Anyway here's a fine example on display at dawn in our fig tree, just don't  dream about giant spiders tonight. 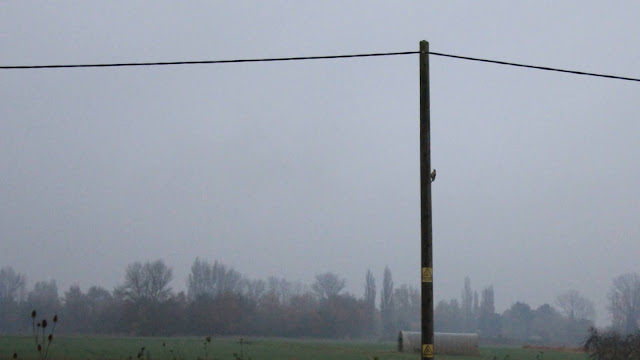 Every morning, weather permitting, this woodpecker is up on the electric pole practising his drum rolls. Now, he can't be trying to find food because the pole is tarred and I wouldn't think many bugs and insects would tolerate that environment to make their home. So my theory is that it must be down to practice and enjoying the noise he creates, the noise is quite considerable and he must get quite a buzz from the tone and reverberation.       I've tried to get closer to him but as soon as I touch the back gate he's away, even if I go for a telephoto lens he's gone when I get back so he must be modest and camera shy, but being bright green and red I can't see where the shyness comes in. You have to work for your photographs with this woodpecker.