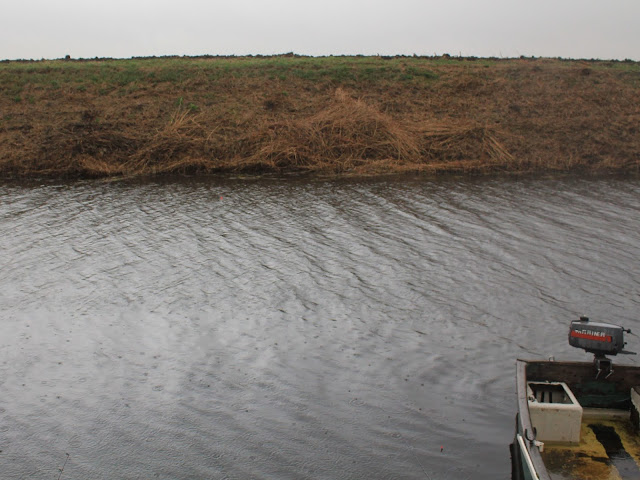 It's Monday and I decide to go Pike fishing after an early lunch, a little rain is forecast but looking at the predictions it's not going to be an awfully heavy or lengthy downpour so and we were away to the river the Boss made me a bacon sandwich. There was little rain in the air but not enough to activate the windscreen wipers. What would do without optimism.

By the time I parked up in the farmyard the rain had arrived and the wind was absolutely bitter cold, but it won't last long I told myself. The wind was now beginning to heap up the cut reeds on the opposite bank so it won't be long before they're in the river making life more difficult. 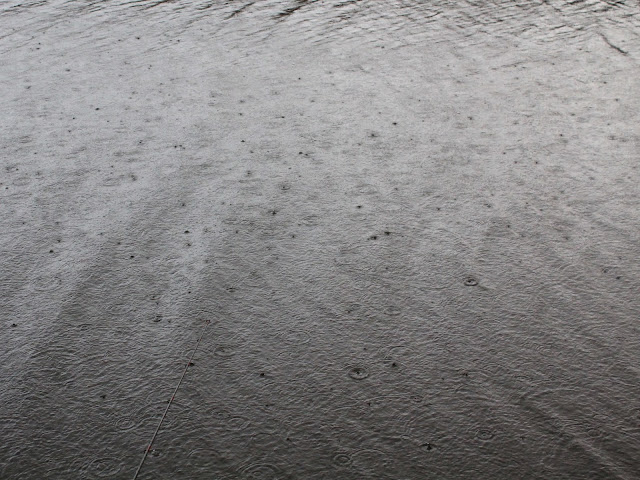 An hour so into the session and the rain was steadily getting heavier.As an aside the super waterproof trousers were proving to be not very waterproof, they didn't even appear to be showerproof and an abandoned boat was steadily filling with water. Three hours later soaked and frozen to the core the farmer offered me a cup of steaming 'Trawlerman's tea' next to the stove in the farm kitchen. It was worth the agony of previous three hours just for that warming treat.

So, no pike and one bite I didn't even see, although the parallel lacerations on the bait looked more like the attentions of a Zander. With renewed optimism I'll be back at the end of the week when the latest storm has blown itself out. Well I hope it's blown out by then and hopefully I should have dried out by Friday. 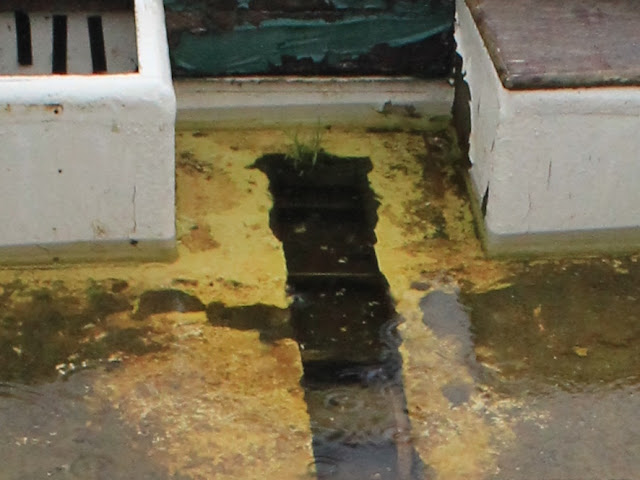 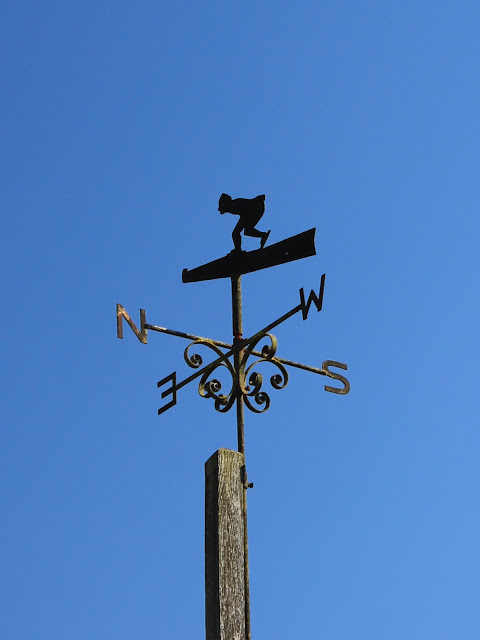 Which way is the wind blowing?

Wandering around the village while I'm walking the two terriers there are lots of interesting things to see and once you've fixed on one line of thought you begin to see more of the same thing. After seeing and admiring one weather vane it made me realise that  weather vanes are a little bit of a lost art-form.       Those that I have seen in and around the village range from the simple displaying the owners special interest or hobby interest to versions that look as if the owner has just won the lottery where an anemometer has been added with a nod to baronial wrought iron gates, there's even an optional live pigeon. Here's just a small selection and there'll be more to follow over the coming months all showing the obsessions and eccentricities of their owners. Love them all, the shooters and skaters. 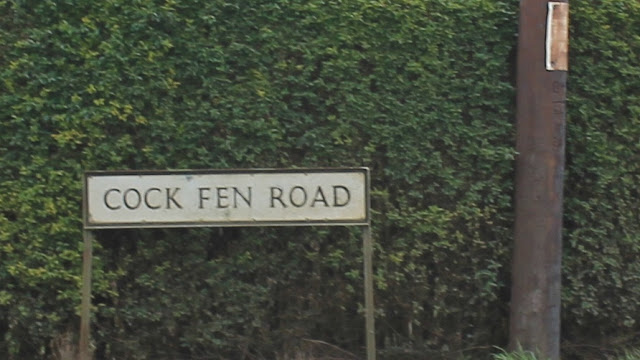 What's in a name?

There are some strange names for droves and roads in West Norfolk. Sometimes they can be named but with two different names that mean the same thing, for instance Setchey and Setchy or Pious Drove and Pius Drove, you get the drift here, slightly eccentric, simply careless or just plain obvious?       Personally the Boss and I don't care it's just fun spotting them as you drive around the area but for starters here are few fine names, obvious names, some that can't decide on where word spaces should go and one or two that make you wonder just how they got the name. There'll be more to follow so watch this space.       Never mind it gets us out and about. 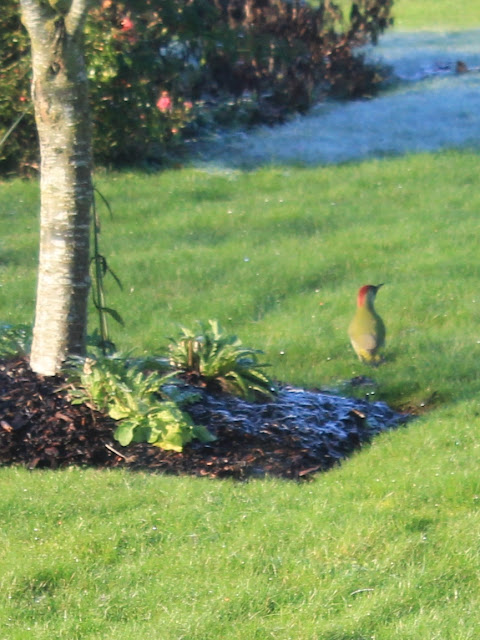 I do love a redhead

The woodpecker that visits the electricity pole at the back of the house, well I assume it's the same one, has taken to foraging for food on the front lawn. He, or she, usually spends about ten or fifteen minutes quartering the lawn in the hunt for food. It must be worms that are the desired breakfast of the day because it's so cold that there can't be many insects at ground level. I assume the bird doesn't have to break through the frosty crust but the whole exercise must be part of the hard hunt for winter food and survival.       The photographs came out well despite being taken through the window of my little studio, they say that red and green should never be seen together but it seems to work here. I hope the redhead comes back to  visit soon. 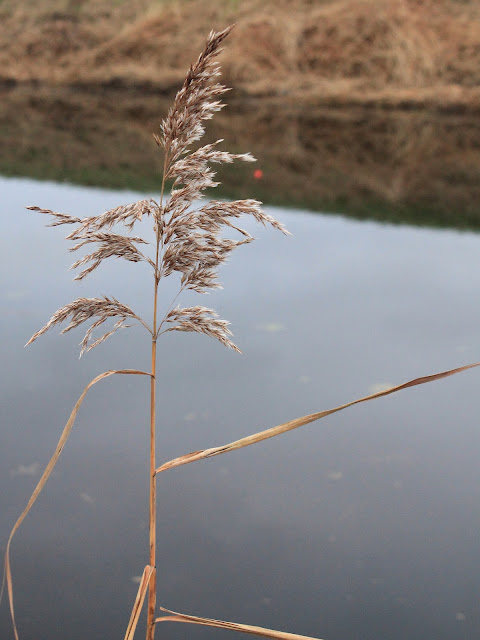 A change of tempo and of expectation too

Well, all the family plans for Christmas and the New Year have sailed out of the window to that Valhalla where failed plans go, mind you it must be pretty full in there with all of the cancelled plans. Never mind though we've decided we're lucky, we live in a lovely place where we can walk our terriers in peace and we don't even have to see anyone if we don't want to and that works for me.       The walk with Barney and Lucie this morning was, as always, a solitary one just me and the two terriers enjoying the frost and the sunshine accompanied by noisy Fieldfares and Redwings feasting in the orchard. The birds were scoffing the windfalls and the last of the apples on the trees, when the orchard is stripped bare they'll move on but at the moment there is a real focus on feeding and clearing the fruit.       The really absorbing sight was the colours of winter. The frost, the reeds, the dead plants doing their own flower arranging and the last of the fruit on t